Some vehicles that are used for camping can be difficult to attach a driveaway awning to.

A good example of this is very small vans and people carriers which are both frequently used as camping vehicles, although there is no reason that these awnings can’t be used with a regular campervan.

A freestanding awning means that there is no attachment tunnel that would normally attach to the side of the van, there is normally a small hood to provide a little shelter between the vehicle and the awning, but there is no specific tunnel that connects to the van or car.

Some campers prefer this type of awning as it removes any need for connecting the awning to the van when you get back to the site, it also means there are no attachments to worry about on the vehicle, whether it be a specific awning rail or a magnetic strip that contacts the roof of the vehicle.

They differ from day tents as they usually feature taped seams and features that would normally be found on a regular tent, this makes them more weather resistant.

As is visible in the above photo there is no awning tunnel attached to the van but still has the same features as the regular Milestone awning with the attachment tunnel.

There are other versions of this Outwell awning available too such as this Milestone Pace Nap which features a separate sleeping area on the side, perfect for expanding the sleeping capacity of your van.

And there is also an air inflatable version of this awning available too, for those that like the flexibility and quick inflation times of the air version. 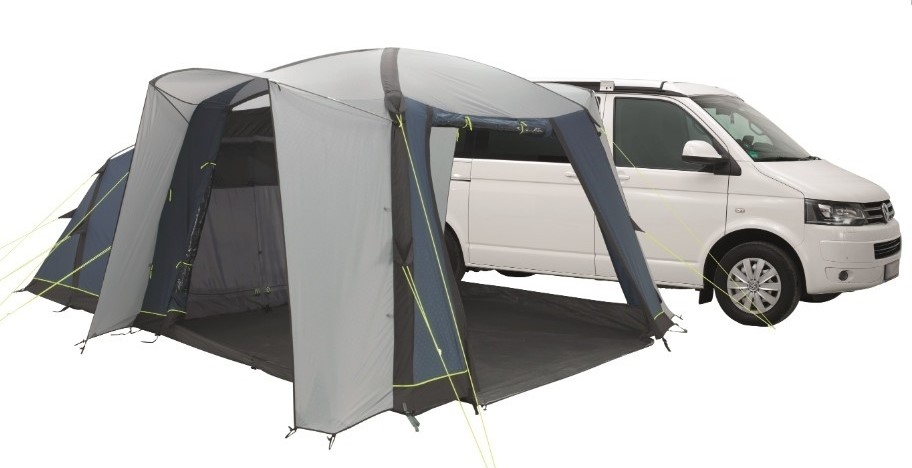 So why not use a regular tunnel tent instead instead?  The main reason is that it won’t be as convenient to use in conjunction with a vehicle, mainly because it will only have one door to access the tent through and this would make difficult to exit the tent without climbing through the van.

The reason why these awnings are sold as awnings and not tents is due to the shape of the construction, they have shaped the side of the awning to be more upright on the van side area which makes it sit next to the vehicle closer than most tents will allow.

They also feature a door at both the front and back to allow for easy access between the van and the awning whilst still having the main front door to exit and enter the awning through.

If you have any questions, please don’t hesitate to contact the sales team here.