In recent years awnings for both motorhomes and caravans have moved over to using air inflated tubes instead of poles in their construction, mainly due the ease of assembly and more resilient characteristics.

Vango were the first to use this technology with their Air Beam® concept.

They use a sleeve constructed from tent material with a PVC inner tube that Is not only durable and puncture resistant, but is also lightweight and strong.  All the air inflatable awnings use the same construction for the air tubes, but the valves and pressure release valves are what makes each manufacturer unique.

Vango for instance on their Airspeed beams, use a one-way valve that the pump nozzle twist locks into place.

Air is prevented from leaving these Air Beams using a spring-loaded valve mechanism that once the pump is removed, it seals the hole preventing air from escaping.  This spring – loaded mechanism can be pushed in and twisted to lock into place, which allows the air to be let out when packing the awning away.  This type of valve requires the use of a pump with a pressure gauge as the Beam has no pressure release valve.

Outwell use a system that is unlike the others that we will talk about here.

The Outwell smart air system incorporates the Boston valve system, which is similar to the type of valve as inflatable kayaks.  There is no twist lock on these valves and they rely on friction to keep the hose attached to the valve.

This system does not use a spring-loaded valve like the Vango system does, it uses a simple system of a one-way valve for the inlet (inflate) and a simple tap for deflation.  To deflate an Outwell air tube, there is an air tap at the bottom which allows the air to escape once opened.

Easy camp feature a system similar to Outwell’ s but they don’t have the air release tap below the inlet valve.  To deflate the tent the valve needs to be unscrewed from the air tube which then lets the air out.

Like the Outwell, the hose does not lock into the valve but relies on friction to keep the nozzle in place. 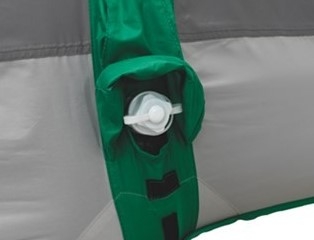 Outdoor Revolution use a system that is like the Vango, but is more sophisticated.  It features an over inflation valve so there is no need to worry about damaging the air tube by overinflating it.  Whereas the other air inflatable systems require a gauge on the pump to check the pressure level of the awning, the Outdoor revolution system does not require the pressure to be monitored.

Instead the tube can be inflated until the pressure valve can be heard venting air, at this point the pump can be uncoupled from the valve and it will be at the correct fully inflated pressure. 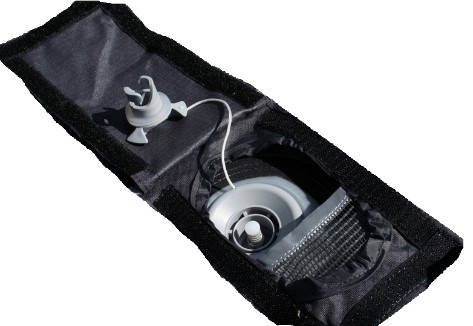 When packing the tent away, all that has to be done is to push in and twist the spring-loaded valve centre and it will allow the air to escape, allowing the remains of the air to be extracted from the tubes.

Outdoor Revolution are so confident of the quality of their air tubes that they off a lifetime warranty on them whilst main material of the awning receives a 2 year warranty against manufacturer defects or material errors.

So that’s the main difference in the air inflatable tubes of the awnings between the different brands of Awnings that we stock.

The awnings frame and construction can vary, but here’s an explanation of the basic types of air frame shapes.  The most basic type of air awning is the tunnel arch design, The Vango Galli Drive Away Awning is a great example of this, the air beams on the inside have been marked so you can see what they look like from the interior of the awning.

The side shows what the tubes look like from outside. 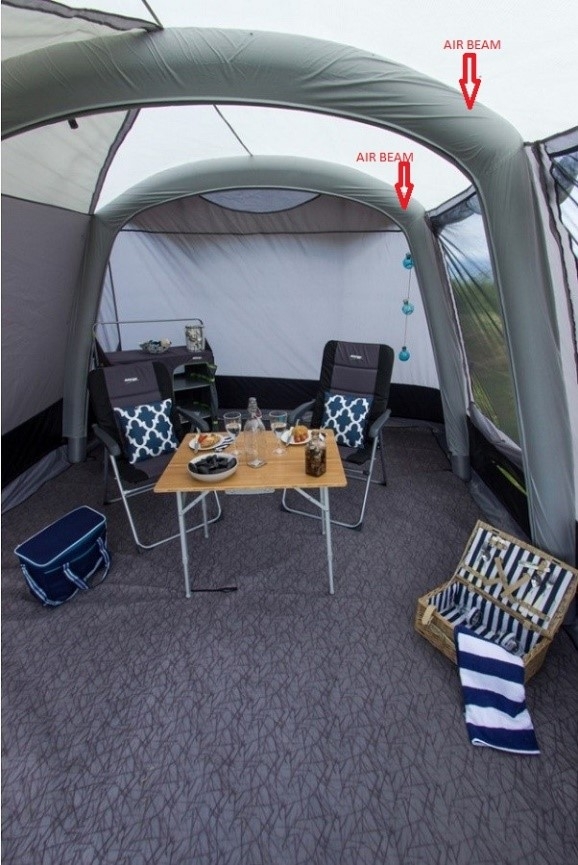 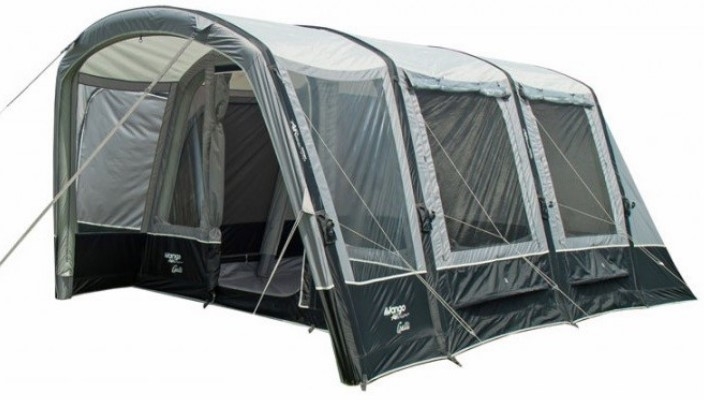 This design of awning is great as it can be pitched more successfully than a frame design on uneven ground.   The downside is that there are 3 separate valves to inflate, and single handedly they are much more difficult to erect than a cross frame design as the arches do not stand up on their own, whereas the cross-frame air system will almost stand itself up unassisted.

Cross frame designs are easier to assemble on your own, but they prefer level ground to be pitched on.  A great example of the cross-frame awnings is the Outdoor Revolution Moveairlite Classic which is pictured below.  This is the central cross in the centre of the inside of the awning. 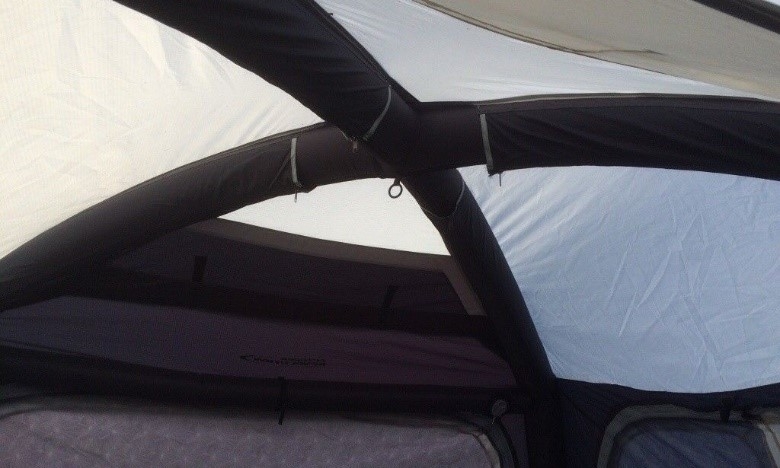 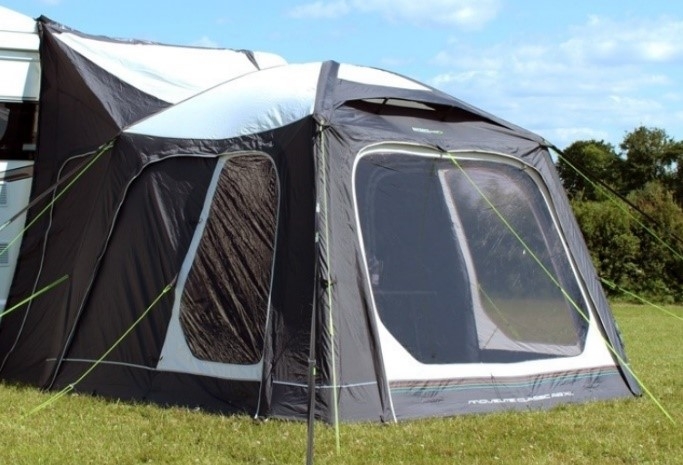 This type of awning can be used freestanding as a shelter or day tent if desired, it also is less reliant on the placement of guy ropes, as it holds itself up unassisted.

These are the 2 main types of awning construction, although caravan awnings tent to be designed differently as the awning does not need to be able to be left at the campsite stood on its own.

The beams in caravan awnings tend to run in the opposite direction to the tunnel awnings, as they lean on the side of the van for support.  Once the caravan is removed the awning can’t stand on its own.  This is an example of an air framed caravan awning. 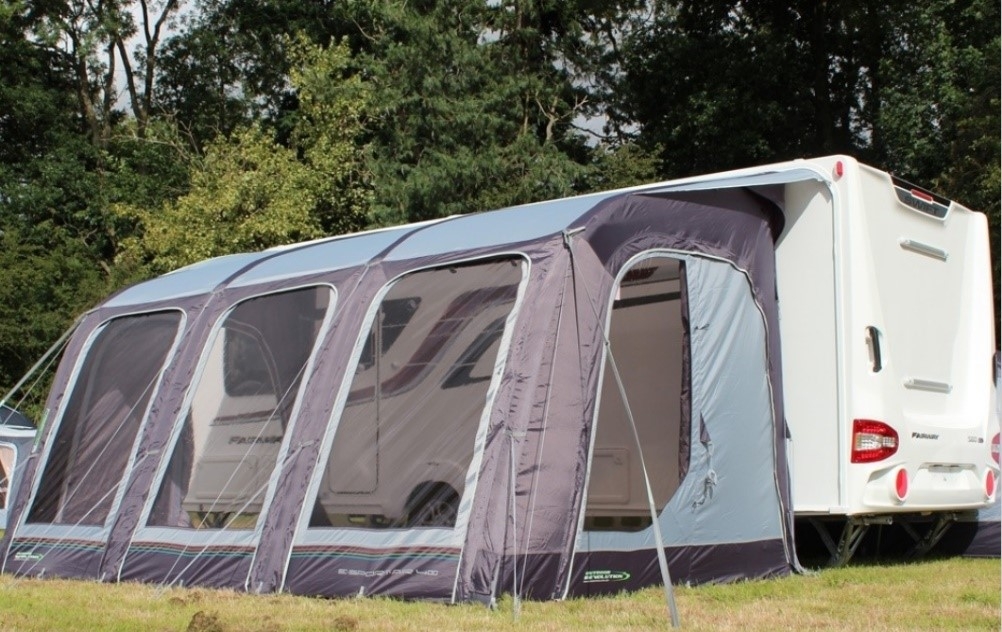 This is the E-Sport Air 400 caravan awning, and the frame construction is visible here.

Having covered the main types of air awning construction, you may find it useful to read the Blog on how to attach an awning to a vehicle which also explains awning heights and additional fittings.

If you have any questions, please don’t hesitate to contact the sales team here.